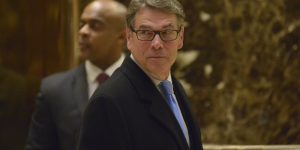 Rick Perry, former governor of Texas, is seen in the lobby of Trump Tower in New York, U.S., on Monday, Dec. 12, 2016. Senate Majority Leader Mitch McConnell said he had the “highest confidence” in the intelligence community, in sharp contrast to President-elect Donald Trump’s attack on the CIA after reports it found that the Russian government tried to help him win the presidency. Photographer: Albin Lohr-Jones/Pool via Bloomberg