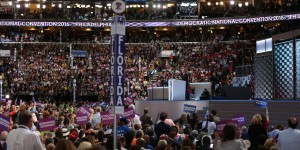 Michael Bloomberg, founder of Bloomberg LP, speaks during the Democratic National Convention (DNC) in Philadelphia, Pennsylvania, U.S., on Wednesday, July 27, 2016. With the historic nomination for the first woman to run as the presidential candidate of a major U.S. political party, Democrats gathered in Philadelphia hoped they had turned a corner on Tuesday. Photographer: Daniel Acker/Bloomberg via Getty Images