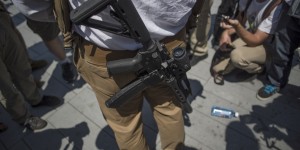 An open carry advocate holds a gun while speaking with members of the media during the Republican National Convention (RNC) in Cleveland, Ohio, U.S., on Tuesday, July 19, 2016. Donald Trump sought to use a speech by his wife to move beyond delegate discontent at the Republican National Convention, only to have the second day open with an onslaught of accusations that his wife’s speech lifted phrases from one delivered by Michelle Obama in 2008. Photographer: Victor J. Blue/Bloomberg via Getty Images