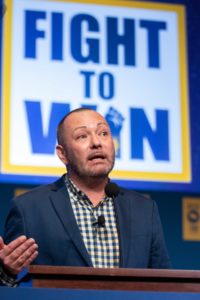 “It cuts me to the core to know that my sisters and brothers who identify by a different gender than the one they were assigned at birth will now be forced to make such an unenviable choice because of a policy that has no actual bearing on someone’s ability to serve in the armed forces. And I’m at a loss for words why President Trump is trying to hurt our military by attacking Americans who just want to serve their country,” said AFGE NVP for Women & Fair Practices Jeremy Lannan. (PRNewsfoto/American Federation of Governme)