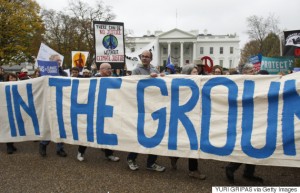 Protesters march outside the White House in Washington, DC, during a climate change rally on November 29, 2015. Hundreds of thousands of people rallied around the world Sunday on the eve of a Paris summit aimed at averting catastrophic climate change, but violent clashes in the French capital soured the show of people power. AFP PHOTO/YURI GRIPAS / AFP / YURI GRIPAS (Photo credit should read YURI GRIPAS/AFP/Getty Images)