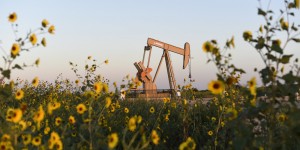 An energy installation on a property leased to Devon Energy Production Company by the Catholic Archdiocese of Oklahoma City is seen near Guthrie, Oklahoma, September 15, 2015. Casting the fight against climate change as an urgent moral duty, Pope Francis in June urged the world to phase out highly-polluting fossil fuels. Yet in the heart of U.S. oil country several dioceses and other Catholic institutions are leasing out drilling rights to oil and gas companies to bolster their finances, Reuters has found. And in one archdiocese — Oklahoma City — Church officials have signed three new oil and gas leases since Francis’s missive on the environment, leasing documents show. Picture taken September 15, 2015. To match Exclusive POPE-USA/DRILLING REUTERS/Nick Oxford