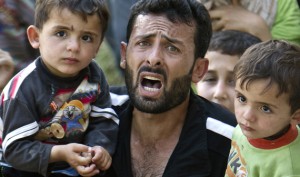 A Syrian refugee man surrounded by children shouts during a spontaneous protest against Syrian President Bashar Assad, in a camp in Yayladagi ,Turkey, near the Syrian border, Wednesday, June 15, 2011. Syria’s government is calling for the return of thousands of refugees who fled to Turkey to escape violence in a northern town. More than 8,000 Syrians, half of them children, have sought refuge in camps in neighboring Turkey following a military crackdown that authorities said was to snuff out “armed terrorists” in the region. (AP Photo/Vadim Ghirda)