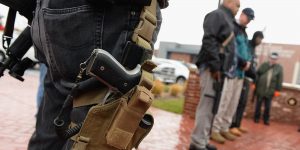 Open carry gun activists participate in a march in front of the city police department and minicipal court on November 16, 2015 in Ferguson, Missouri. About a dozen supporters of gun rights gathered in Ferguson November 16 for what organizers hoped would be a racially integrated open-carry march to demonstrate that Second Amendment rights are for everybody. AFP PHOTO / MICHAEL B. THOMAS (Photo credit should read Michael B. Thomas/AFP/Getty Images)