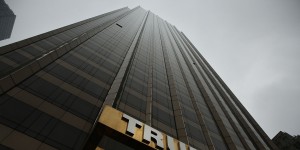 NEW YORK, NY – MAY 06: A Trump owned hotel stands in Manhattan as protesters rally in front of it on May 06, 2016 in New York City. The protesters, many of them Latino and Puerto Rican workers, are voicing their disapproval of Donald Trump’s statements on the Puerto Rican debt crisis. While Trump said he doesn’t believe the struggling unincorporated U.S. territory should have to pay all that it owes, he does not support a bailout for the island and instead would like to see the debt restructured. (Photo by Spencer Platt/Getty Images)