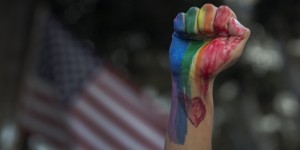 LOS ANGELES, CA – JUNE 13: A defiant fist is raised near an American flag at a vigil for the worst mass shooing in United States history on June 13, 2016 in Los Angeles, United States. A gunman killed 49 people and wounded 53 others at a gay nightclub in Orlando, Florida early yesterday morning before suspect Omar Mateen also died on-scene. (Photo by David McNew/Getty Images)