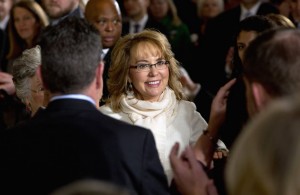 People applause for former Arizona Rep. Gabby Giffords as she arrives in the East Room of the White House in Washington, Tuesday, Jan. 5, 2016, to hear President Barack Obama speak about steps his administration is taking to reduce gun violence. Also attending were other individuals whose lives have been impacted by the gun violence. (AP Photo/Jacquelyn Martin)