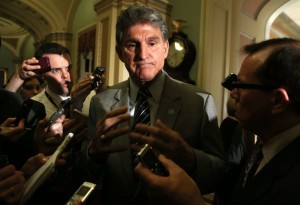 WASHINGTON, DC – APRIL 17: U.S. Joe Manchin (D-WV) speaks to members of the media after a vote on the Senate floor April 17, 2013 on Capitol Hill in Washington, DC. The Senate has defeated a bipartisan proposal by Manchin and Sen. Pat Toomey (R-PA) to expand background checks on firearms purchases and close the so-called gun show loophole. (Photo by Alex Wong/Getty Images)